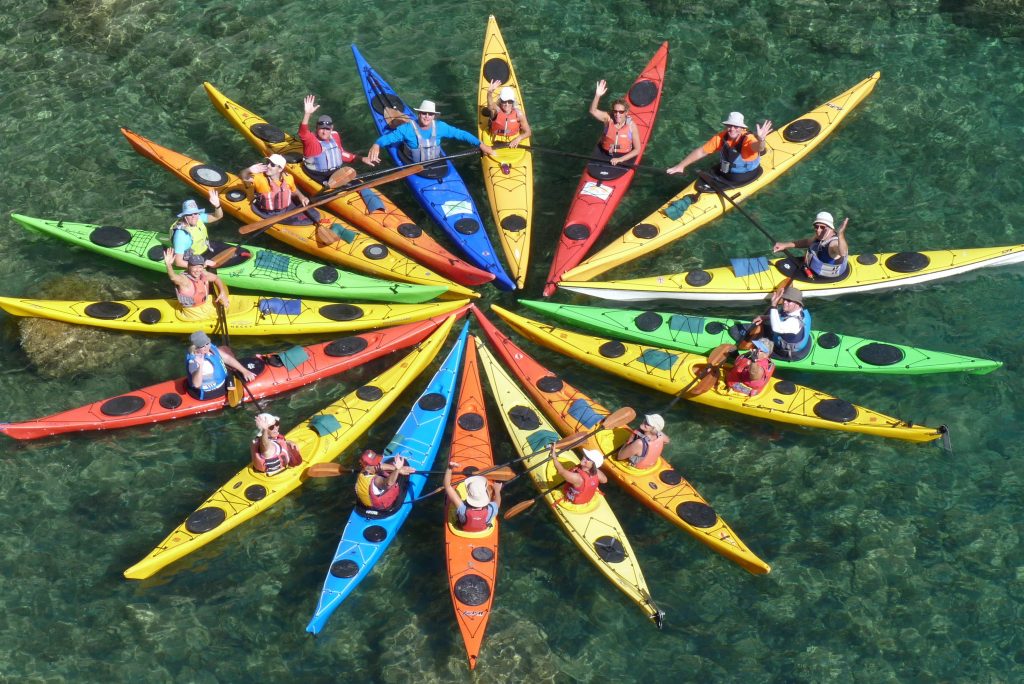 Magical, surreal, astounding, supernatural
Kayaking Milos, Greece: September 19th
– September27th, by Steve Berner
I chose Milos because Jackie Tobacco, a fellow Long Island Paddler, had been there twice and
raved about the kayaking. After spending seven days there with Kristin and my fellow Paddlers,
I know what she is talking about.
The island of Milos, in the middle of the Mediterranean Sea, is a dry, rugged, hilly land
surrounded by clear, turquoise waters. Volcanoes formed it millions of years ago. It is thirteen
miles long and nine miles wide and shaped like a horseshoe. It can be reached by air from
Athens in forty minutes or by ferry in five hours. There are four major villages on the island and
over seventy beaches. The 5,000 residents make their living through tourism or mining.
Because the tourist industry is relatively new, there are no hotel chains or Starbucks to be
found anywhere on the island.
Rod Feldtmann, the owner and operator of Sea Kayak Milos, arrived on this Greek island in the
1990’s as a geologist from Australia in search of gold. What he found instead was a beautiful
wife and a fun way to make a living – he started the first sea kayaking business in the Greek
islands. He is a Level 4 BCU sea kayak coach, leading trips and teaching skills from the end of
April through October. (Last summer, he took people kayaking on seventy-two consecutive
days before taking a day off.) In fourteen years, he has accumulated over forty kayaks – ten of
them doubles. He uses Werner paddles and quality spray skirts and PFD’s.
Petrinela, Rod’s wife, owns the guesthouse in the village of Triovasalos, where we stayed. The
café on the ground floor is where we met each morning at 8:30 AM for a delicious breakfast
buffet. It was also the spot we usually came back to after dinner for some ouzo and fresh chargrilled octopus served up by Petrinela’s sister, Katerina, and their dad, something he has been
doing for fifty-three years.

With the Explore Milos package, we paddled for three days, took a day off, and then paddled
for another three days. Each morning, Rod joined us in the café to go over plans for the day.
At 9:30 AM, we would set off for one of twelve different trips, depending on which way the
wind was blowing. An hour later, we were paddling among some of most spectacular scenery in
the world. The sea has carved the island’s coastline into a series of spires, arches and cliffs pock
marked with caves and tunnels in brilliant whites, deep reds, and dark browns. We were
amazed at the various shades of blue in the water and at places like Sarakiniko Beach, also
known as Moon Beach. Instead of sand, it was actually white pumice rock, smooth enough to
lie on. Each day seemed to be more beautiful than the day before. Magical, surreal,
astounding, supernatural were some of the words we used to describe how we were feeling.
There were some small volcanic islands a few kilometers off the coast. Most had nowhere to
land, but one, Little Akradia, had a small beach. We stopped there for lunch, and everyone
(but me) hiked to the top for some more amazing views.

On our one day off, we explored some of the history of the island. First, we visited the
archeological museum and learned that Milos was the center of a thriving obsidian trade as
long as 15,000 years ago.We also found out that the statue believed to depict Aphrodite the
Greek goddess of love and beauty now on display in the Louvre, also known as the Venus de
Milo, was discovered on Milos in 1820. After leaving the museum, we toured a catacomb
where Christians had to hide their dead 2,000 years ago. We finished the day by walking five
kilometers to the port city of Adamas on a road the Romans built.

Sadly, all good things have to come to an end: this adventure was no different. However, there
are still six paddling trips on Milos I have yet to experience, sulfur springs to soak in, and a blue
cave to explore. I am sure I will be returning one day in the not too distant future.
I organized a group of eleven kayakers from Long Island, New York to paddle with Rod
Feldtmann the island of Milos in September of 2014. The Explore Milos package we chose
consisted of eight nights lodging and six full days of kayaking. It turned out to be the paddling
trip of a lifetime for all of us.

Rod, a native of Australia, made booking the trip easy. Upon arrival, we had an orientation
meeting in his father-in-laws café before being shown to our rooms. The café became our
meeting place , where we had a delicious breakfast each morning, served by Rod’s wife,
Petrinela, and where we gathered at night to talk about the day and sip ouzo served with fresh
charbroiled octopus by Katerina, Rod’s sister-in-law, and father-in-law.
Rod has twelve different put-ins that he picks from each day, depending on the direction of the
wind. Wherever we kayaked, the scenery was spectacular. The sea has carved the island’s
coastline, formed millions of years ago by multiple volcanoes, into a series of spires, arches and
cliffs pockmarked with caves and tunnels in brilliant whites, deep reds, and dark browns. The
crystal, clear water was every shade of blue you can imagine.
Although we left at 9:30 AM each morning and didn’t get back until 6:00 PM, we never paddled
more than 1 ½ hours without taking a break. At these times, we swam, snorkeled, sunbathed
or practiced kayak skills with Rod. While we are all experienced kayakers, some beginners
joined us on a couple of the days and had no problems keeping up in Rod’s tandem kayaks.
I look forward to going back one day. After all, there are still six paddling trips to experience.